“I look at a photo of my mother
She was happy, she could have been twenty years old
The hair gathered in a silk scarf
And an absent look.
A  vivid view of the Sixties
Of a radiant Catania”* 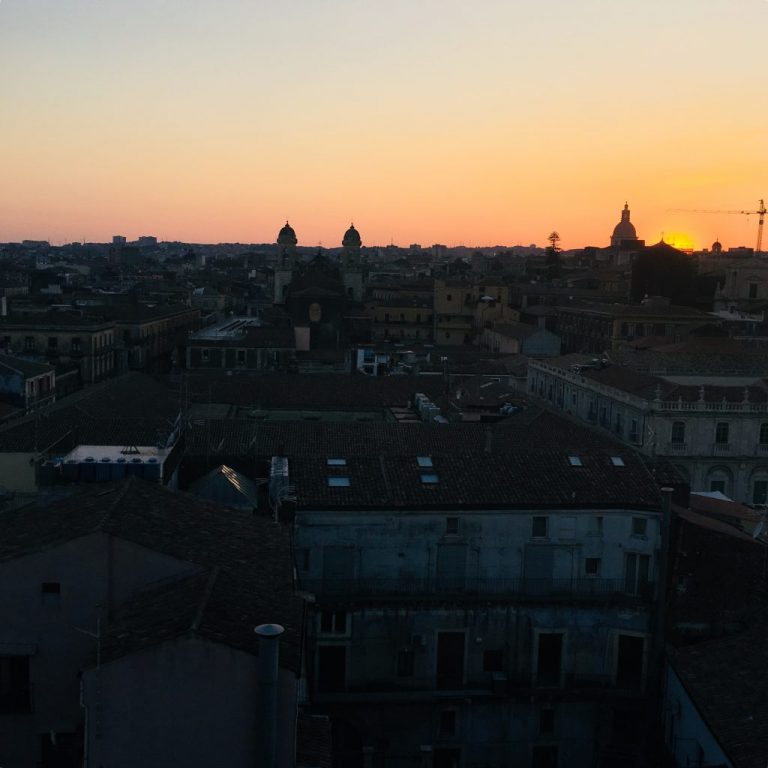 Catania at the sunset

The first memory I have of Catania comes from a song entitled “In Bianco E Nero”, black and white, by the Italian musician and song writer Carmen Consoli who was also born in this beautiful baroque Sicilian city.

Last summer I decided to spend a week there, first because I wanted to visit it and second because its position is strategic to visit Taormina, the Etna Volcano, Acitrezza and many other enchanting villages which surround it. Landing here from Rome, Milan or Turin gives you also the possibility to easily reach Marzamemi and Noto.

The first thing I suggest to do here is to book a hotel in the city centre in order to reach everything with a five minute walk.

The centre develops around the Main Street, Via Etnea delimited by two doors: Porta Ferninandea in the north and Porta Uzeda in the south.

Piazza Duomo is the main square. Its landmarks are the Cathedral and the picturesque fountain of the Elephant. 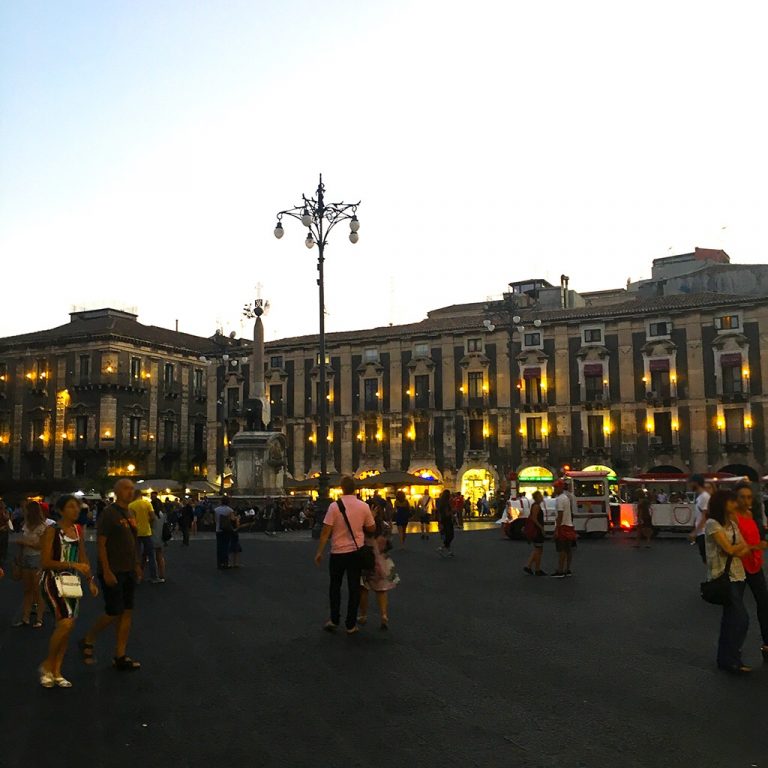 Fountain of the elephant

The story of this beautiful fountain is quite misterious. According to a famous legend, it is connected with Eliodoro, a sourcerer who lived in Catania in the 8th century. He was very religious and studied very hard to become a Bishop but he was not elected. So, he started practising black magic and making the lives of his citizens very hard.  He also created a magic elephant, that he used to ride, using the lava of the volcan Etna. One day he entered the Church with his elephant. The Bishop challenged him. They both would have crossed a fire, the one who would come out unhurt would have become the Bishop. The real bishop crossed the fire, but when it was Eliodoro’s turn, he threw a stone at him. Eliodoro didn’t survive and so the city was set free from the wizard. After being banished for many centuries, the statue can now be found in the middle of the Cathedral Square.

Together with Via Etnea, here also stretch the other main streets of the city:  Via Garibaldi, Via Vittorio Emanuele and via Crociferi.

Via Crociferi, once know as the Holy street, takes its name from the fathers of the Church of San Camillo and is considered one of the most beautiful cities of Italy.

The Cathedral is dedicated to Sant Agata. It has been rebuilt several times due to the many earthquakes it suffered. The current main facade dates back to the 18 century, but belfry and par is were completed in the 19th century. A beautiful marble staircase allows to enter the Church, which at night is protected by a  sumptuous iron gate. For few euros, buy the ticket for the roof terrace and visit it during sunset. The pink colour that will cover the walls and roofs of the nearby  buildings and the breathtaking view will become the best memories to take home after leaving Catania. 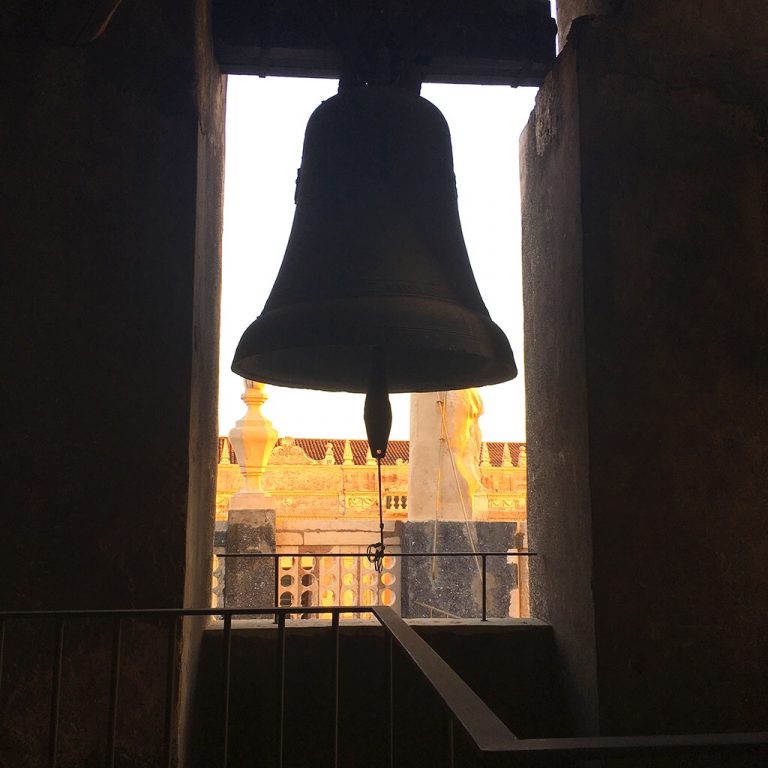 Bell on the Cathedral roof

In the Cathedral square you will find small trains or buses ready to tour you around the city. Save your money. The centre is really noisy, and the volume of the explanation was so low that I didn’t hear anything. Use the public transports to reach other attractions instead, like the small but cozy cinema museum.

Leave the cathedral on the left and reach Via Pardo. Here you will find the fish market. I suggest you to come here at midday and have lunch in one of the market’s eatery or to buy fresh and nut fruit for your snacks. 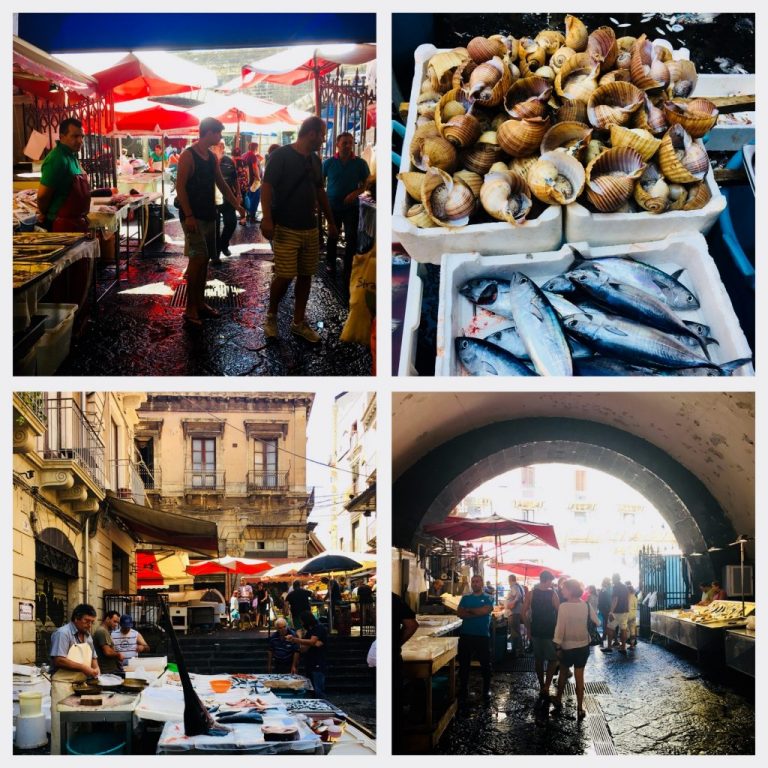 If you return towards the Cathedral, with a 5 minute walk, you can easily reach the old University, which is definitely worth a stop. 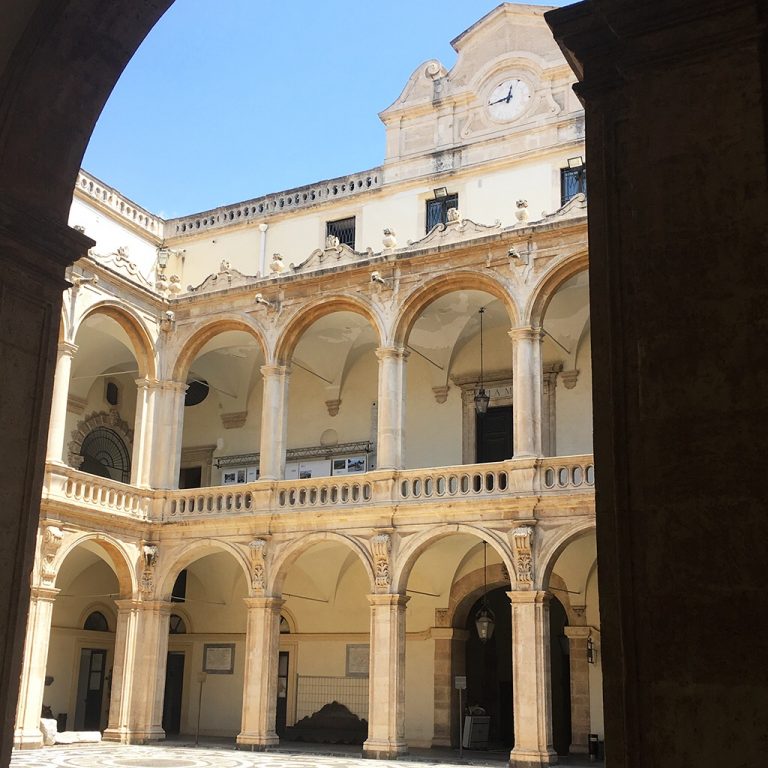 Established in 1434, it is the oldest University of SicilySicily is the largest island in the Mediterranean Sea. It is an autonomous region of Italy, in Southern Italy along with surrounding ... More, the 13th of Italy and the 29th in the world.

If you are here with children, another interesting stop can be at the Cinema Museum. Located in Viale Africa, you can easily reach it by bus or subway (stop Viale Africa/Piazzale Chinnici) . When I visited it, I was really surprised to discover that Catania was home of many Movie companies at the beginning of the 21 century, that lately disappeared.

Depending on how many days you can spend here, other stops can be: Castello Ursino, Terme Achillanee, Museo dello Sbarco as well as the many churches you will find while walking around.

At night have a stroll in the San Berillo District, an  area with ancient buildings, some still displaying the signs of the bombing of WWII, first home of artisans and then populated by poor people and prostitutes. Today, there is the strong will to transform this area by hosting gourmet restaurants,  fashionable bars and art events. A late drink paired with chats is something to do before leaving Catania. 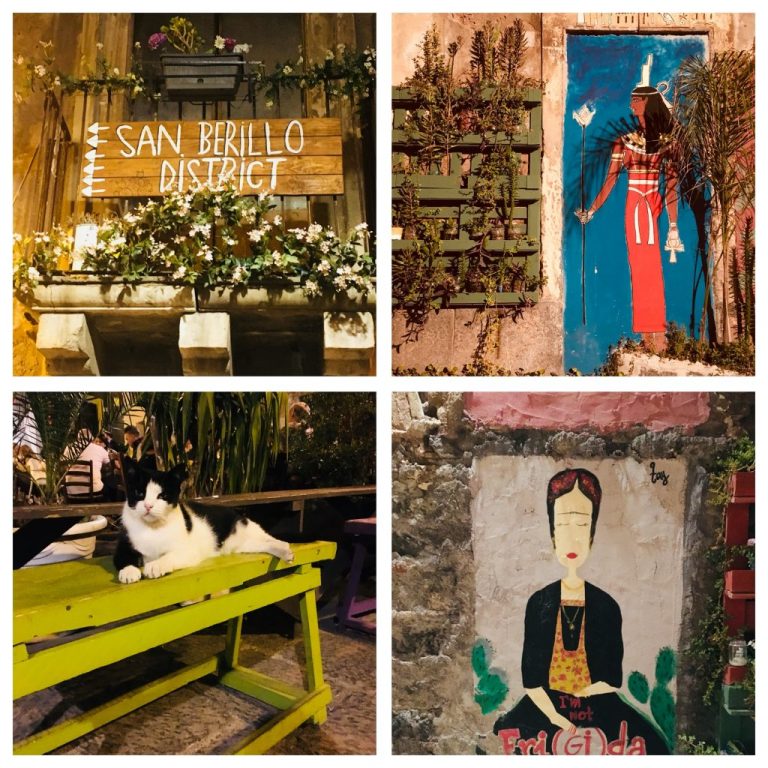 *the translation proposal is mine.

Previous Post: « Panettone or Pandoro? If you visit Italy during Christmas you have to choose.
Next Post: The FisherMan, Gourmet FishBar in the Heart of Milan »