“Kennst du das Land wo die Zitronen blün?”. Do you know the land where the lemons grow was the question Mignon asked to Wilhelm Meister in one of the books of the famous Goethe’s trilogy. The beginning of this short poem is a true hymn to a land full of beauty and enchanting atmosphere. 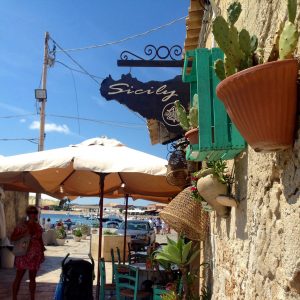 But Sicily is not just the lands of lemons, is the land of fish, bottarga, almonds, pistachio nuts, chocolate, granita, figs and prickly pears, Pachino tomatoes, ricotta cheese and exquisite perfumes and flavours that can stuck in the mind and remain forever.

I’ve spent one week in the south east part of the region that I love to consider the Italian California. I’ve reached it thanks to a very low-cost flight (some 100 euros RT from Turin) landing in Catania.

The first thing I suggest you is to book a car, since it is impossible to use public transportation there. One of the cheapest rent-a-car is Sicily by car. For one week you can rent a car for 150 euros in September and, travelling every day, you might spend another 50 euros for the gas (our was a diesel). And believe me, I travelled quite a lot.

What I suggest you to do is to equally divide your time between art and nature. Without forgetting to spend some time to taste the very best of the Sicilian delicacies.

Here what I suggest you to do:

Have a walk in the centre of Catania and get lost among the baroque palaces.

Visit the sites of Scicli, Ragusa Ibla, Noto, Modica, Ispica, some of which declared a Unesco World Heritage. 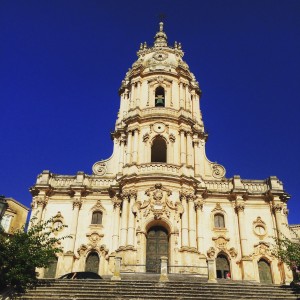 Ragusa: The Cathedral in the new city

In the same area you can find the Vendicari Natural Park that is free and a lot of beaches. One of my favourite is the San Lorenzo beach near Marzamemi, where the sand is fine and the sea is blue.

In this area you can find a village called Pachino, famous for a particular kind of tomatoes that is grown on the sand near the sea, thus enriched with a particular salty flavour. Many shops sell hand made dried pachino tomatoes that you can prepare with olive oil and serve as appetizers. It is really common to see bowls of pachino tomatoes with bread or crostini, crunchy bread, for you to taste before buying. Don’t be shy and try this simple but tasteful preparation. 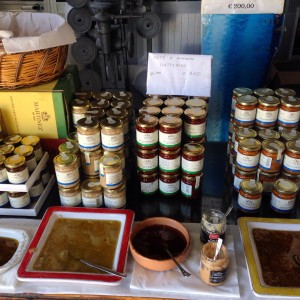 Try to eat the famous pasta con la bottarga. In this area, bottarga is the tuna egg that gets washed, salted, pressed and dried according to an ancient and long method. The results is a piece of egg that is then grated on pasta enriched with olive oil and pistache pesto. 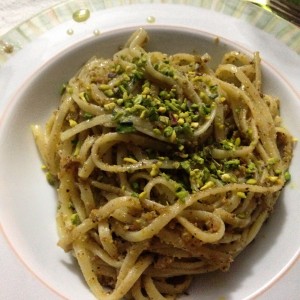 Something you can find in bars, bakeries or little booths is pane cunzato, acconciato or condito in Italian, a loaf of bread filled with oil, enchovies, caciocavallo cheese or tomatoes. It is a sort of bruschetta, where the topping is inside. Simple and delicious. 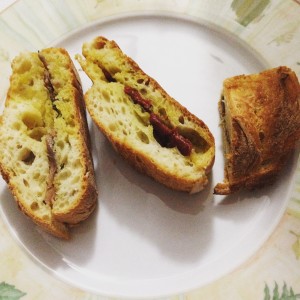 Do not forget to taste granita, a semi-frozen dessert made with ater, sugar and varous ingredients like almonds, toasted almonds, pistaches or, when in season, mulberry. You can also try the version enriched with panna, whipped cream. It is a nice way to enjoy your morning coffee, to complete a meal or to have an afternoon snack.