If you want to plunge yourself in a culture, there is no better way than visiting religious buildings, a public festival or a market. And TorinoIt is the capital city of the Metropolitan City of Turin (an administrative division of Italy) and of the Piedmont region, and was the first... makes no exception.

Piazza della Repubblica hosts what we call Porta Palazzo. The name comes from one of the doors (Porta means door in Italian) to enter the city when TorinoIt is the capital city of the Metropolitan City of Turin (an administrative division of Italy) and of the Piedmont region, and was the first... was a Roman military camp and from the presence of a Palace (Palazzo in Italian) that in Medieval times hosted the House of the Senate.

Located in the north-west part of the city centre, you can easily reach Porta Palazzo with a five minute walk from Piazza Castello. Take Via Garibaldi and then turn right in Via Milano. Go straight on until a hug Square opens in front of you. What you see is the most important and biggest market of the city, and also the biggest market of Europe en plain air; it includes a covered space as well as many shops all around the square.

The covered part on the north-west side of the squared, is under the “Antica Tettoia dell’Orologio”, a building of glass and metal built in 1916 with several entrances, and a tower with a clock. Here you will find 88 numbered booths which sell food produce. 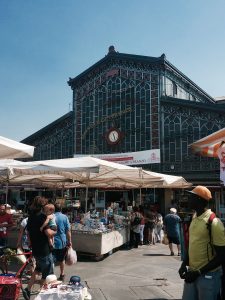 By taking the entrance right under the clock, on your right you will find “Dolceria Viziale” a booth that serves coffee and sweets. Don’t leave the city without having at least a cheap but delicious breakfast here. If you are lactose intolerant like me, you can find biscuits prepared with almonds, cannolo filled with zabaione, apple strudel and cappuccino all lactose free to pair with a homemade almond milk. Everything is prepared daily in a laboratory in the nearby neighbourhood. 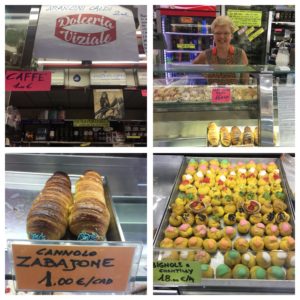 Next to this covered pavillion, on the right if you are watching the clock tower, there is the “farmer market” where farmers sell directly their produce. There you can also find fresh eggs, plants and aromatic herbs. 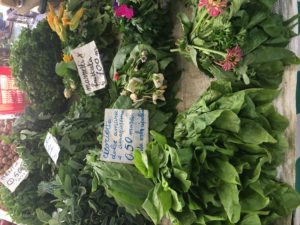 After you have had breakfast, or at least coffee with pastry, take a stroll among the booths where you can find fresh, dried ands shell fruit, all kind of vegetables, cheeses from every region of Italy, cold cuts and bread.This is definitively the best place to buy healthy and cheap snacks for your long sessions into parks and museums. 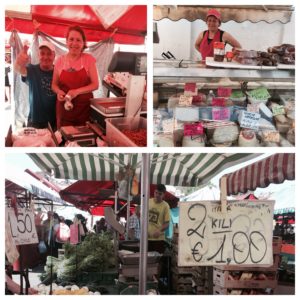 In the south part, there are other two pavilions, one hosting the fish market and the other booths selling meat. While in the north-west, there is building that substitutes the former clothes market, seat of shops and a bar. Personally, I rarely visit it. Maybe because I prefer buying clothes in other markets.

As soon as you will arrive in Porta Palazzo, you will notice a melting pot of cultures and languages. That’s because the area has always been the first home of people migrating from other regions of Italy or, more recently, other countries. This can of course have negative and positive consequences. For the negative, mind your wallet! Don’t go there with jewels or expensive clothes. The high concentration of people that constantly pack the market makes this the favourite working place for pickpockets. So, probably having a low profile and constantly checking your bag won’t leave a bad memory on your visit.

But on a bright side, if you are looking for ethnic food, this is the right spot in town. I will only mention Grand Magreb in Piazza della Repubblica 24, where you can have lunch with less than 10 euros. For me here is the best cous cous of TorinoIt is the capital city of the Metropolitan City of Turin (an administrative division of Italy) and of the Piedmont region, and was the first....

Finally, if you want to take a seat and have a longer break, go to Galleria Umberto I. Once seat of an important hospital, this gallery, hosts a several bars and fancy restaurants, that can satisfy even the most refined palate. You find it on the right as soon as you arrive from Via Milano. 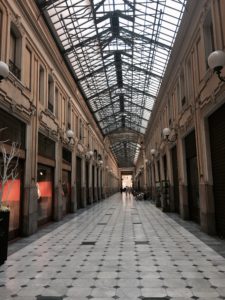 Of course here you can also find souvenirs even if, to me, the best memento you can bring home is intangible. It is made of colours, flavours and sounds that will fill your senses.

Previous Post: « A Japanese spot in the heart of Torino
Next Post: Going Clear, Going Raw. Grezzo: the paradise for vegan chocolate lovers »